With the conclusion of the Fiji COP23 in Bonn, November 2017, there are now 170 parties that ratified the Paris Agreement and all signed it, with only one Party indicating their wish to withdraw (the Trump administration). At the point of ratification, the Intended Nationally Determined Contributions (INDCs) turn into the Nationally Determined Contributions (NDCs). Most countries went forward with keeping the INDCs as is, Morocco updated its INDC, basically adding a landuse component, and North Korea presented a new NDCs, as they hadn't submitted an INDC before.

In total, there are now 170 NDCs and INDCs covering 195 countries, who are collectively responsible for basically all of human-induced global greenhouse gas emissions.

Together with our colleagues from the Potsdam Institute's portal (www.pik-potsdam.de/primap-live/), our portal is the only one we know of that provides a comprehensive overview of all submitted NDCs and INDCs with quantification where possible. The (I)NDC factsheets are in fact a collaboration with the PRIMAP group at the Potsdam Institute for Climate Impact Research. as some of our other products, like the climate spirals.

Below, you will find factsheets for every individual country that submitted an NDC and/or INDC before 3rd October 2017 - as listed in the INDC and NDC registries. Check our twitter feed @ClimateCollege for update announcements.

Final note: Where a factsheet has a yellow warning sign at the top we are indicating that either we struggled to quantify that NDCs or INDCs, we found strongly mismatching data, or we encountered some other issue. That's it! Enjoy... with caution.

(Authors of the Factsheets - building on a big team effort)

Click the name of the country in the table below for individual NDC & INDC Factsheets.
You can find bulk download of our factsheets and archived previous versions here. 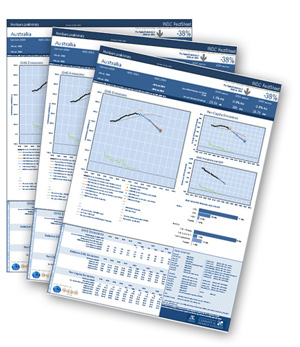 Also check out our other useful INDC resource:

www.mitigation-contributions.org - Our website that allows you to manipulate G20 country targets and determine what INDCs "should" be to track a least-cost trajectory within 2°C of warming.

And have a look at these great resources from other research groups:

www.climateactiontracker.org - An in-depth analsysis site that looks at around 35 INDCs from major countries and rates them.

live.primap.org - A selection of interactive tools around INDCs and emissions scenarios from our partner group at the Potsdam Institute of Climate Impact Research.

www.unep.org/climatechange/pledgepipeline - A compilation of INDCs in an Excel table with useful collection of requested financial support data.

sustainable.unimelb.edu.au/beyond-paris - A collection of useful resources for before, during and after COP21 in Paris provided by our parent institute, the Melbourne Sustainable Society Institute.

Updates 4th November 2016: We updated quite a number of Factsheets with up to date historical data until 2014, we included the Cancun 2020 year pledges, accounted for LULUCF credit estimtes, added the NDC of North Korea, and updated the graph's display a bit. Apologies for printing issues that occurred with some earlier versions of the Factsheets. Plus, we added a sticker "Entry-into-force" edition onto the factsheets.

Updates 14th of May 2016 version vs. 22nd April 2016 version: There were a couple of bugs in the 22nd April which we fixed. Panama provided INDC, but as there was no specified BAU level we could not quantify it.

Updates in 16th November version vs. previous 30th October version version: We now include, Iran, Saudi Arabia, Pakistan and other new submissions (although some of them are unquantifable). Chinese coal consumption data was updated (see background in this New York Times article)

Previous update within 30th October version: United Arab Emirates were updated and EU28 countries are analysed on a country-by-country basis.